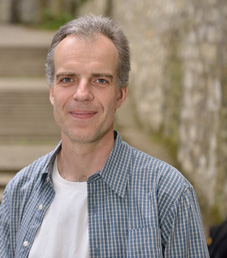 Pavel Šafařík was born in Prague in 1971. He started to play the violin at the age of seven at a music school. Following studies at the Prague Conservatory and the Academy of Performing Arts, he attended interpreting courses including Viktring and Semmering, Austria. He has received a number of competion awards (laureate of the Kocian Violin Competition at Ústí nad Orlicí in 1986; first prize at the Beethoven competition at Hradec nad Moravicí in 1988; finalist of the International Fritz Kreisler Competition in Vienna, 1992).

As a soloist, Pavel Šafařík has appeared with several Czech orchestras, performing concertos by Tchaikovsky, Bruch and Mendelssohn, as well as works of Saint-Saëns, Beethoven and others. He also regularly appears on the chamber music circuit, both in his home country and internationally, and records for the Czech Radio. Between 1991-1997 he was the assistant leader in the Czech Philharmonic Orchestra.

Currently, he is the assistant leader in the Prague Chamber Orchestra and Prague Symphony Orchestra.